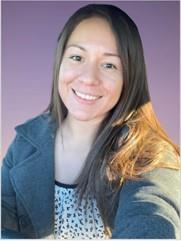 Hello everyone! I am excited to have started my career as an EC Resource Teacher! I have lived most of my life in Harlingen, Texas. When I was 19, I joined the Marine Corps and was stationed in San Diego, California for most of my enlistment and it is also where I met my husband who is still on active duty. We have lived in California, South Carolina and now North Carolina with our two boys, ages four and six. We also have three dogs, Shadoh, Nugget and Pumbaa. We also have a kitten named Harvee.

After I got out of the Marine Corps in 2014, months later, I became pregnant with my first child and from then until I graduated college, I was a stay-at-home mother. I have attended a total of 5 colleges. One in Texas, two in California, one in South Carolina and one here in North Carolina. It took what seemed like forever to graduate because of all the moving and transferring, but I am happy to say that on December 11, 2021, I finally obtained my bachelor’s degree from UNCW.