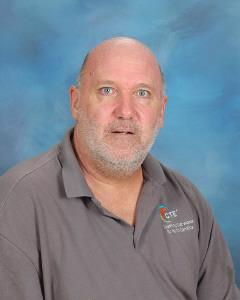 I spent over 30 years prior to becoming a teacher working as a chef in country clubs and restaurants around eastern NC. In addition to being a executive chef I was a kitchen manager, maitre' d, and general manager during that time.

I went back to school in 2006 to earn my teaching certificate. I became certified in Elementary Education in 2009 and Family and Consumer Science in 2009. I taught Foods I and Parenting at South Central High School in Winterville, NC in the 2010-'11 school year and in the beginning of the 2011-'12 school year before joining the staff at Jacksonville High School in November 2011 where I taught Foods II until 2015. This is my seventh year teaching Foods I and II here at DHS.

I was born in Raleigh, NC and lived there for most of my childhood until moving to Goldsboro, NC. In Goldsboro, I was first introduced to the food services industry at the age of 15 when I was hired as a life guard at Walnut Creek Country Club and on my first day was pulled out of the pool area to work in the club kitchen. I graduated from Eastern Wayne High School in 1980. I continued work at Walnut Creek Country Club and for a brief time at Highland Country Club in Fayetteville, NC before moving to the beach 1987. From 1987 until 2006, I worked in and around Wilmington, NC and Wrightsville Beach, NC in a variety of restaurants and country clubs.

During this time, I also attended UNCW and earned a Bachelors degree in Political Science. I met my wife, Kristen, a few years after graduating when she was a student at UNCW as well. After getting married, my wife supported me in my decision to go back to school to become a teacher. This also, conveniently, coincided with the birth of our first child, our daughter Shelby in 2006. As I continued to work in the food industry and go to school, we welcomed two more children, our sons, Joseph in 2007 and William in 2009.

After graduating in 2009 with a licensure in elementary education, I sought licensure in Family and Consumer Science hoping to be able to teach foods and culinary arts. My hard work was rewarded in 2010 when I was offered a job at South Central High School in Winterville, NC. There I taught Foods I and Parenting. I was lucky to be able to move to a job closer to my family in the fall of 2011 when I joined the Jacksonville High School staff where I taught Foods I and Foods II until 2015. My family moved to Sneads Ferry in May of 2015 and at that time I accepted a position at Dixon High School teaching Foods I and II. This my seventh year here at DHS.

I believe that we are all teachers and all students and I expect to learn as much from my students as they do from me. I welcome diverse learners in my classroom. I would ask any student who has challenges  in my class, or any other class,to let me know so we can work toward a solution that will work for all. Students with allergies and/or learning disabilities are encouraged to let me know one on one so we can work together for a successful school year.

I do not believe there is an unteachable student. My daughter, Shelby, was diagnosed at age two with autism, and although she cannot speak or do many things, she is very intelligent and capable of learning. She has taught me that every student can be reached even if it is through non-conventional methods. Please don't build up a wall against learning, help me to build a bridge that we can cross to help you learn just as Shelby does every day!

I love my job here at DHS and grateful for the opportunity to LOVE, CARE, and SERVE the Bulldog Way!