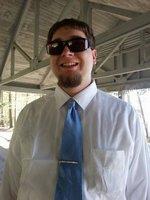 Long before he was the amazing teacher he is today; Mr. Clevenger was just a mild-mannered student studying at Appalachian State University.  One day, while absently browsing the dark recesses of the campus library, he happened upon the most extraordinary tome that shone with a resplendence that was only matched by a quest item in a video game. Disregarding the care in which he took picking it up, the tome savagely bit into Clevenger’s hand! The tome hit the ground with no evidence of the sinister cut it just bestowed, but he knew the truth: like a bite from a spider, this copy of The Great Gatsby had forever transformed the young man. He knew he had a responsibility to use his powers for good, so he became Bookman, the Literary Legend, and swore to use his powers to help others. After many failed attempts of vigilantism, he decided to hang up the costume, become a teacher, and educate people on the importance of books.