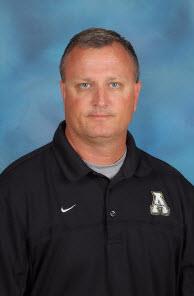 Doug Kidd is a native of Greensboro, NC where he graduated from Page High School in 1986 and then from Appalachian State University in 1991 with a degree in Math Education.  Doug landed a job at Watauga High School where he taught and coached for 17 years.  In 2008, Coach Kidd moved to Swansboro High School.  Coach Kidd was named the Teacher of the Year at Swansboro High school for the 2013-2014 School Year.  Coach Kidd is in his 29th year of teaching math at the high school level.  Coach Kidd is in his 31st year coaching the Men's & Women's Soccer Teams.  He was named the 2015 National Coach of the Year by the United Soccer Coaches.  Coach Kidd is also in his 4th year serving on the Girl's Basketball staff.