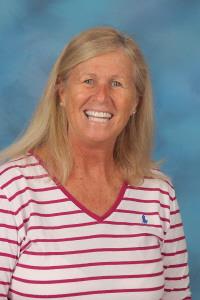 Programming and Broadcasting I and II

1983 - East Carolina University - (major) B.S. in Communications with a concentration in broadcasting

Originally began in the television broadcasting business immediately out of college at WCTI-TV, Channel 12 in New Bern.  I served in the news department covering Onslow County and in the advertising department as the Creative Services Director.

Licensed in the state of North Carolina in English and Digital Media.

Married to Coach Jim Sheehan (University of South Carolina, class of 1978) - retired from Swansboro High School after 32 1/2 years teaching, coaching and serving as athletic director.  Coach Sheehan started the tennis program at SHS, and the tennis facility is named after him.

Daughter - Morgan, Swansboro High School graduate, class of 2013 - Morgan is a graduate of the University of North Carolina - Pembroke where she majored in Mass Communications with a concentration in broadcasting and was on an athletic tennis scholarship. Morgan graduated a semester early (fall 2016) and began her Masters in January, 2017.  Morgan graduated in December 2018 with a Masters in Sports Administration.  She is currently the Associate Sports Information Director at the University of North Carolina Pembroke.